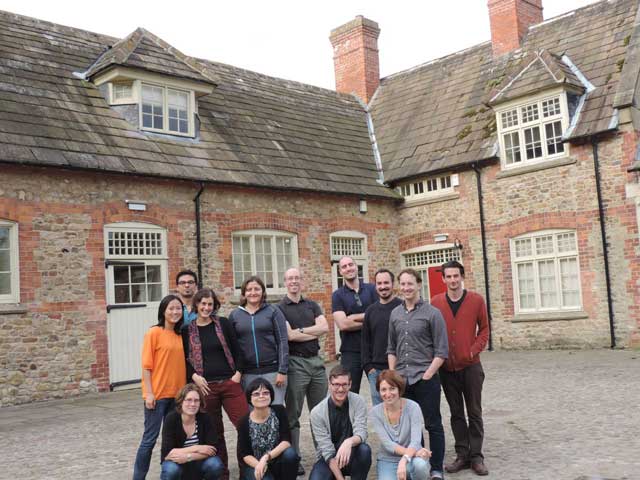 I’ve been to many events called “workshops”. The name rarely fits, and looking back over the years, they generally don’t leave much of a mark. A couple of weeks ago I took part in a workshop that really deserved the name, and it was simply fantastic. It also had the lowest budget of any event that I’ve been involved in. So what worked, and how can we do more of this?

Ok, so here’s the awkward part: I organized the workshop, and it was egregiously cliquey. And it was on a topic dear to my heart. So this is the gushing of somebody who has not the slightest hint of objectivity. The theme of the workshop was on language and memory, and specifically what we’ve called selective fallibility, the uneven effects of grammatical constraints on moment-by-moment language processes. The workshop had only 13 people , all of them former members of our team or their students and postdocs. Many people were meeting for the first time, but it was a close-knit group. And it needed to be close-knit, because of the venue.

We were staying at the University of Maryland Study Centre at Kiplin Hall, in North Yorkshire, UK. As I explained in another post, Kiplin Hall has a historic connection to the university and to the state, and it was inspired by an alumni magazine feature. It has been used for undergraduate study abroad courses for a number of years, but never for a ‘grown-up’ academic event. The Study Centre is an old stables building and blacksmith’s shop that has been converted into a kind of glorified youth hostel. The four bunk bedrooms sleep 20 altogether, and there’s a well-equipped kitchen, cosy living room, dining room, and a classroom. Kiplin Hall itself looks impressive, but the Study Centre cannot be construed as upscale living, though it’s nicely done. Our group was together 24/7: working, cooking, eating, and sleeping. That’s why our experiment required a group of people who were already pretty comfortable with each other.

Some details: we met for two and a half days, three nights. We scheduled discussions for 2 hours each morning, followed by a long break for lunch and exploring from 11-3 (the far north of Yorkshire is beautiful, as this year’s Tour de France  showed), then two more 2-hour discussions from 3-7, punctuated by high tea at 5. We had unscheduled discussions throughout the day and evening, and they were so lively that we almost forgot to hit the local pub before last orders. Kiplin Hall is a fairly straightforward 4-hour drive from London. It’s about 10 miles from the nearest train station and supermarket. We cooked everything ourselves. We were able to get so many people together in the UK because we were all headed to the AMLaP conference in Edinburgh, so we didn’t have to worry about flights. But the combined cost of accommodation and food and drink ran to around £30/person/day, which is quite the bargain.

So what worked about the workshop?

1. We had a very small and cohesive group, and practically no distractions. In addition to making it feasible to spend a lot of time together, this meant that nobody was there to prove something or to put on a show. We could strongly disagree without taking it personally.

2. We had a focused theme, and a relatively clear goal, based on a body of research that almost all of us had already contributed to in some way. We did not all arrive with the same background knowledge — the different expertise that people brought to the table was really valuable — but there was a lot of shared understanding to build upon.

3. We all had a rough understanding of the problem that we were trying to address, and believed that it was a problem worth addressing. And we had at least the outlines of a specific goal: to take stock of a few years of research, to discuss the next steps, and to at least sketch a write-up of what we came up with.

4. We all contributed to workshop organizing. Everybody had a role in making it work, and nobody was just along for the ride. Starting from a Google Doc that mapped out the different elements of the event, individuals or sub-groups took charge of program planning, travel coordination, meal planning, shopping, finances, collecting notes/minutes, etc.

This all made for a different experience than the typical workshop, where you listen to a parade of individuals giving talks that are loosely related to the workshop theme, followed by brief and sometimes strained discussion sessions. Each session did have an assigned leader and theme, and the leader did pull together some Powerpoint slides to get things rolling. But these were not talks, I’m not sure that we ever got close to the end of the prepared slides, and we spent most of the time in discussion. The discussions went on for a long time, continuing through mealtimes and beyond. We weren’t listening to a series of mini-performances and judging whether we liked them, nor were we bickering over methods or whether we believed in individual findings. Folks were candid in their assessment of what had and hadn’t worked in their own research, and were not out to defend their published views. We didn’t solve all of our problems, of course, but I do think that we got a clearer sense of what we do and do not know, and of the range of options that we need to explore moving forward. And we also made good progress in understanding what we need to communicate, and to who. We created a plan for a multi-authored write-up.

Oh, and it was a lot of fun too. I think many of us came away feeling energized. I know that I certainly did.

Is any of this applicable to workshops beyond our glorified lab meeting? I think so. We need more events where we’re really coming together to work intensively for a couple of days, rather than mini conferences based on a loosely-related sequence of talks. In order to pull this off, we need to arrive with a clear idea of what we want to achieve, preferably with a shared task. We need participants who are comfortable with a semi-structured format, and who are willing to focus on the common goal rather than on presenting a commercial for their own findings. For this reason, we do need to be selective in who takes part, though everybody at Kiplin Hall agreed that we should not need to be as cliquey as we were for our initial experiment. And we probably need to be willing to put in some cooperative follow-up work, to capitalize on what we started at the workshop.

Personally, I can’t wait to go back to Kiplin Hall, or some other remote and spartan place, to do more of this. Let me know if you have ideas for future events. … Really, I’m looking for excuses.