Making stuff up as you go along. Selectively. 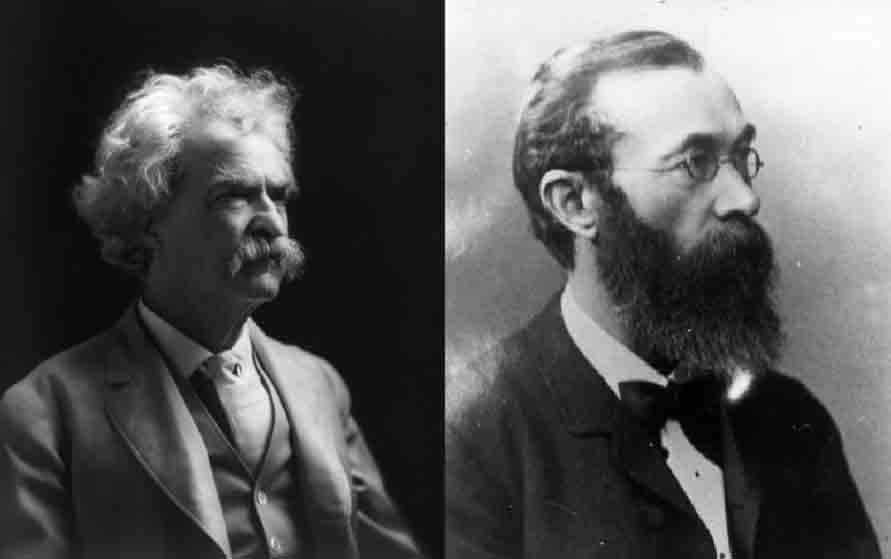 When you talk do you just make stuff up as you go along, or do you plan ahead? And what does your grammar have to say about that? Three new findings about planning ahead while speaking tell a surprisingly consistent story. They take us from a long-standing worry about head-finality to an unexpected finding about unaccusativity. This work is all led by Shota Momma, who’s finishing up his PhD this year (it will likely be just one chapter of his dissertation), and it’s a collaboration with Bob Slevc of UMD Psychology.

Quick summary. How far ahead do you plan when speaking? In particular, when do you plan the verb?

So, this shows that verbs and their objects have a ‘special relationship’, even when the objects look like subjects on the surface. This is not shocking news from the perspective of syntactic analysis, but I’ll count myself as surprised that the effects on sentence production are so clear.

Mark Twain, and Wilhelm Wundt. The starting point is the question of when you plan the verb if you’re a speaker of a verb-final language. This is one of the things that Mark Twain had in mind in his famous essay on The Awful German Language (if you haven’t read it before, do so, it’s fun). And it’s also a puzzle that has driven my interest in Japanese sentence processing over the past 10+ years. We think of verbs as pretty important in the messages that we want to convey, and the form of earlier words in a sentence often depends on the choice of verb (e.g., via case marking, argument structure. So we might reasonably expect the following scenario for constructing a sentence in a verb-final language. First: figure out the verb that you’re going to use. Next: hold the verb in memory while you say everything else. Finally: say the verb. That sounds fine, though it’s a bit of a pain for speakers of these languages, as the first word that they plan would be the last word that they utter. It would be about the worst possible violation of Wilhelm Wundt’s principle, which states, roughly, that the ideal situation in sentence production is one where as soon as you think of a word you say it. (Wundt was a pretty amazing 19th century polymath – also worth a read.) Problem is, though, that some really interesting evidence on German seems to show that speakers don’t plan the verb ahead of time.

Germans just make stuff up as they go along. In the late 1990s, Herbert Schriefers and some colleagues at the Max Planck Institute in Nijmegen ran a clever series of experiments in which they tested how far ahead German speakers plan verbs (Schriefers, Teruel, & Meinshausen, 1998). They did this using the extended Picture-Word Interference task (ePWI). In a regular PWI task, I ask you to name a picture, e.g., dog, but while you’re doing this I mess with you by showing you a related word, e.g., cat. That slows you down, because the related word makes it harder for you to access the word that you’re looking for. The interesting twist in the ePWI task is that I have you describe a picture with a sentence instead of a single word, and I test whether you are slower to say the beginning of the sentence when I use a distractor that’s related to a word that you’re not going to say until later in the sentence. Suppose that you’re about to say The fireman fed the dog, and you’re slower to begin the sentence when I distract you with cat, then that’s evidence that you’ve already planned the word dog, even though it’s the last word that you’ll say. I think this is a pretty cool technique, because it allows you to test what people are planning but haven’t yet said. (Needless to say, these interference effects are always measured relative to a baseline condition with an unrelated distractor word. The experimenters know what they’re doing.)

Schriefers and friends had Germans produce SOV sentences, and found no evidence that associates of the verb delayed speaking. So they concluded that Germans just get along and say the sentence, leaving the planning of the verb to the last moment. That was a surprising finding, but it seemed really solid (5 experiments, great control conditions, etc.). How then to square this with the widespread intuition from Germans, Japanese, and Koreans that they really do plan the verb ahead of time?

No, Japanese shows planning ahead. Shota’s first effort in this area was motivated by this dilemma. He elicited really simple sentences in Japanese either SV or OV utterances, using the same ePWI paradigm as Schriefers. The object-initial sentences were the new part that Schriefers et al hadn’t been able to test in German. In the SV sentences, we found exactly the same thing that had been seen in German: associates of the verb do not delay production of the subject noun. But in the OV sentences, we found a clear interference effect. Speakers are slower to start articulating the object when they’re being distracted by an associate of the upcoming verb. Conclusion: yes, there is advance planning of the verb, but it’s driven by the object, not the subject. That was a nice way of reconciling the interesting German experimental results with the widespread native speaker intuition. The paper recently appeared online in JEP:LMC, but you can find it here: [The timing of verb selection in Japanese sentence production].

English: look-ahead in passives, not actives. As a next step, we wanted to know what’s special about direct objects in sentence planning. Is it their surface grammatical role (e.g., subject, object), or is it their thematic role (e.g., agent, patient, goal)? To answer this, Shota tested active and passive sentences in English. The result was quite clear. Verb associates do not delay the onset of speaking in active sentences, but they do cause a delay in passive sentences. The subject of a passive typically has a patient or theme thematic role, i.e., the same as a regular direct object. So, in combination with the Japanese result, this indicates that the trigger for verb planning is assigning a patient/theme role, not construction of a surface direct object. [Preliminary paper: The timing of verb selection in English active and passive sentences.]

Next step: unaccusatives vs. unergatives. These findings led to a prediction that I was afraid to test. Fortunately, Shota wasn’t. It’s well known in linguistics that there are different classes of intransitive verbs, depending on the thematic role of the sole argument. In unergative verbs, like dance, the sole argument is an agent. In unaccusative verbs, like float, the sole argument is a patient/theme. So if it’s really the case that planning a theme argument requires verb planning, but planning an agent does not, then we should expect a contrast in simple intransitive sentences in English. Interference from verb associates should delay an unaccusative subject, but should have no effect on saying an unergative subject. And that is exactly what we found, with almost improbably clear results. [Paper: Unaccusativity in sentence production.] 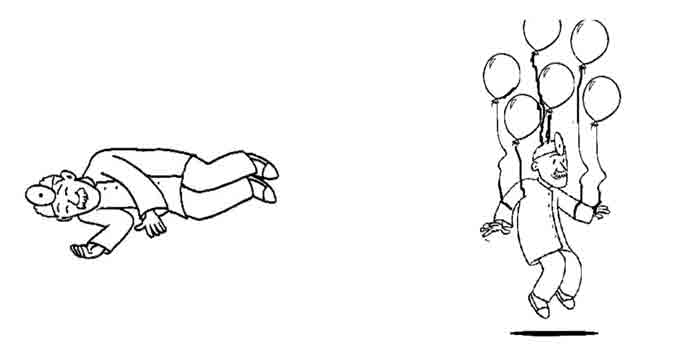 I should mention one additional fact, which might address a worry. Perhaps the interference effects simply appear in the harder sentences (object-initial in Japanese, English passives, English unaccusatives), and have nothing to do with the special status of verb-object relations. That’s a reasonable concern, but we think it’s unlikely. In fact, we do see interference effects in the agent-initial sentences. But they occur later. Most PWI and ePWI studies measure speech onset latency, i.e., how long before you start talking. But Shota also measured the duration of the first noun phrase in the English studies. Those phrases were spoken more slowly in the agent-initial sentences. This confirms that the verb-related distractors do have an effect, but that the verb planning doesn’t start until after the agent has been planned and sent for articulation. 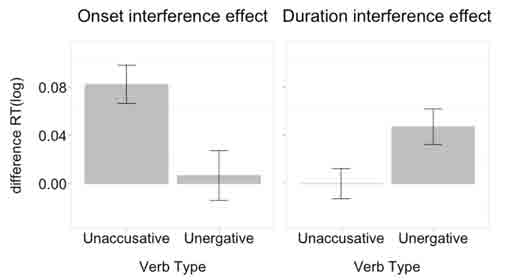 “Theoretical” upshot. I really can’t stand the notion that the term “theory” in linguistics is normally reserved for representational theories, i.e., traditional grammatical analysis. It’s roughly as annoying as the notion that linguistics is only “empirical” if it involves experiments. But these findings are potentially interesting for a representational debate. There’s a dispute out there about how arguments relate to predicates. As I understand it, in some neo-Davidsonian accounts, arguments don’t directly combine with verbs. Instead, they are predicated of an event variable. E.g., Wallace ate cheese is interpreted as “There’s an event, Wallace is its agent, cheese is its patient, and it’s an eating event”. In other words, being the agent or the patient of the event is independent of what the event is. Meanwhile, under another influential account, agents are independent of the verb, but internal arguments such as patients/themes are not (e.g., Kratzer 1996; some lecture notes by Heidi Harley can be found here). These accounts weren’t intended as theories of speech production, but it’s tempting to draw a connection. We found that planning an agent in speaking is verb-independent, but planning a patient is verb-dependent.

These questions about arguments and production are on the edge of my comfort zone. So please weigh in in the comments if you have thoughts on what we should make of this apparently systematic agent-patient contrast.